On dayliq – Wearing a Mask ‘Shouldn’t Be a Debate’ 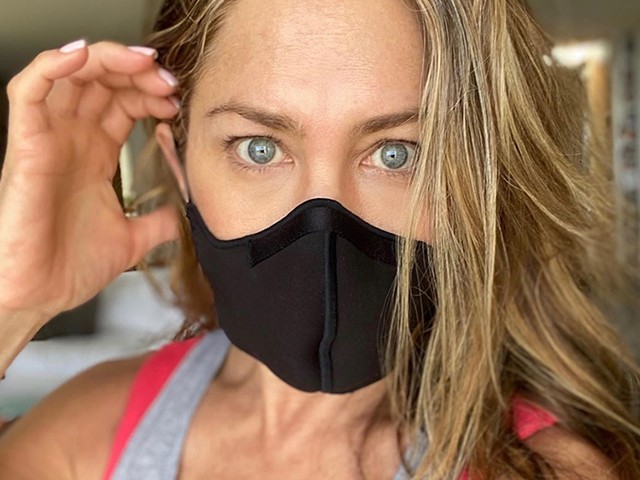 Actress Jennifer Aniston is shaming Americans who don’t want to wear a mask in public, saying that the issue is being “politicized at the expense of peoples’ lives. And it really shouldn’t be a debate.”

Aniston weighed in on the mask debate in an Instagram post in which she called out people who feel that their freedoms are being taken away.

“I understand masks are inconvenient and uncomfortable. But don’t you feel that it’s worse that businesses are shutting down… jobs are being lost… health care workers are hitting absolute exhaustion. And so many lives have been taken by this virus because we aren’t doing enough,” the Friends actress wrote.

“I really do believe in the basic goodness of people so I know we can all do this BUT still, there are many people in our country refusing to take the necessary steps to flatten the curve, and keep each other safe.”

Aniston added: “People seem worried about their ‘rights being taken away’ by being asked to wear a mask. This simple and effective recommendation is being politicized at the expense of peoples’ lives. And it really shouldn’t be a debate.”

The Hollywood star concluded with a plea for everyone to wear masks.

“If you care about human life, please… just #wearadamnmask and encourage those around you to do the same.”

Aniston made no such plea for mask wearing during the recent Black Lives Matter protests and riots, which involved thousands of people crowding together in the streets.

California has seen a spike in COVID-19 cases following weeks of BLM protests. Los Angeles County has been especially hard hit, with thousands of new cases reported on a daily basis.

As a result, the county is shutting down beaches, piers, and parking lots for the July 4 weekend, which is usually an important time for local restaurants, bars, and shops.

To slow the spread of #COVID19 and prevent crowding that can result in more people becoming infected, all LA County beaches, piers, parking lots, and bike paths will be closed Friday, July 3 at 12:01 AM to Monday, July 6 at 5:00 AM https://t.co/TAAoYjk9mg pic.twitter.com/hbBkiC4rnf