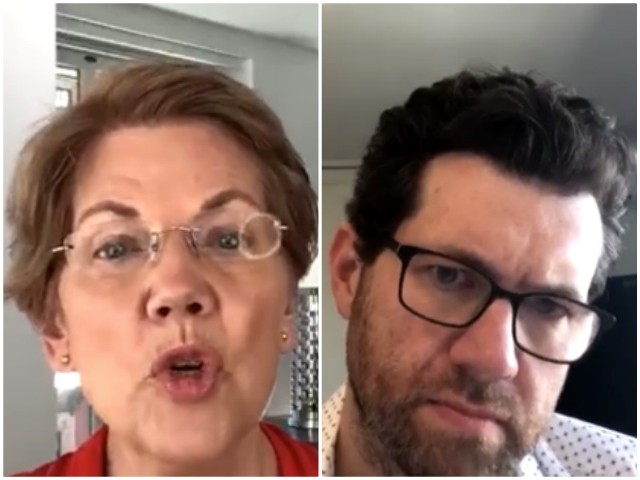 Elizabeth Warren warned that Republican’s must not be allowed to “steal a second seat” on the Supreme Court in the process of replacing the late Ruth Bader Ginsburg in an interview with comedian and left-wing activist Billy Eichner.

She also added more fuel to speculation that Kamala Harris is the Democratic party’s stealth presidential candidate by emphasizing the vice presidential pick over Joe Biden. “Kamala and Joe have got to win this,” she told Eichner.

Billy Eichner hosted the Instagram Live conversation on Monday in which  Sen. Warren (D-MA) discussed a range of subjects, including the late Ruth Bader Ginsburg and what Democrats can do to stop Senate Majority Leader Mitch McConnell’s promise of holding a floor vote on President Donald Trump’s Supreme Court nominee.

Sen. Warren addressed the coming battle over who will succeed Ginsburg, saying voters must not allow Republicans to “steal a second seat” on the Supreme Court — an apparent reference to President Trump’s selection of Neil Gorsuch for the high court over Barack Obama’s choice of Merrick Garland.

“This is a throwdown fight. So much is at stake,” Warren said. She urged people to write, call, and protest, saying that the tactic worked to save the Affordable Care Act. “We need a Supreme Court that’s looking out for us, not just big corporations.”

Warren also urged fellow Democrats to get involved on the national and local levels to ensure Democrats win up and down the ballot in November.

“Kamala and Joe have got to win this,” she said, adding that the margin of victory needs to be wide enough so that “there’s no fighting after this election is over.”

In recent weeks, both Joe Biden and Kamala Harris have made public statements inverting the ticket by emphasizing Harris over Biden. In a speech this month to U.S. military veterans, Biden promised that a “Harris-Biden administration” would help veterans and their families receive the support they need.

Last week, Harris said that a “Harris administration together with Joe Biden as the president” would benefit voters during a conversation with Latino business owners.

President Trump noted Biden’s use of the phrase “Harris-Biden” in an ABC News town hall last week. “Someday you’ll have to explain that one to me,” he said.

Warren said her plan would involve forgiving a large portion of student loans because it disproportionately impacts black Americans.

“It has a real racial equity dimension to it,” she explained. “It would help close the black-white wealth gap.”

During the conversation, Billy Eichner didn’t conceal his gushing admiration for Warren, whom he publicly supported during the primary process.  “I love you!” he told her. “I never question your intentions.”