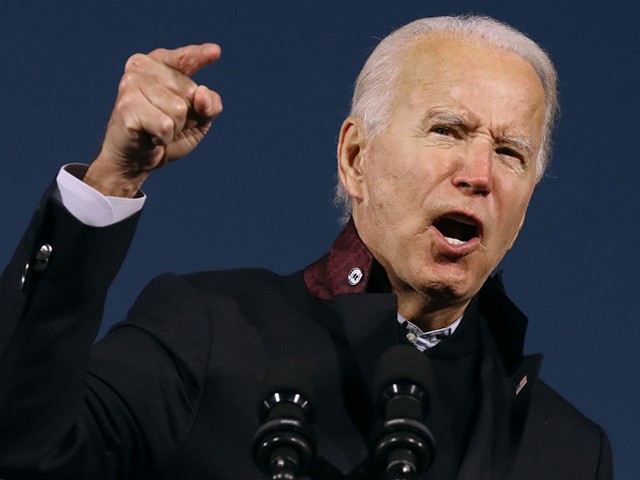 Democrat presidential nominee Joe Biden’s proposed gun control policy includes a provision that could require every AR-15 rifle be registered under the National Firearms Act of 1934. Unless there were some form of carve-out, this could mandate that American gun owners pay a $200 federal tax per AR-15 that they own. The National Rifle Association’s Andrew Arulanandam told Breitbart News that the current “low end” estimate of privately-owned AR-15s in the United States is 18 million. A tax of $200 on 18 million AR-15s means that gun owners could potentially be required to a pay a collective $3.6 billion in taxes, if this policy were enacted into legislation.

That figure does not even consider other guns that might be deemed “assault weapons” by Democrats, which could also fall under the same provisions of the National Firearms Act.

In addition to the $200 tax, owners of guns that are deemed “assault weapons,” under Biden’s view of the NFA, could also be required to register these weapons with federal authorities, submit their finger prints and photograph, and potentially submit to an FBI background check.

All of this is detailed on Biden’s campaign website, which states in bullet-point form (emphasis in original):

The above paragraph on Biden’s website links to a memorandum from former Congresswoman Gabrielle Giffords’ Giffords Law Center that calls for the regulation of “assault weapons” under the National Firearms Act (NFA).

The NFA, enacted in 1934, was the first federal regulation of the manufacture and transfer of firearms. Machine guns, short-barreled rifles, and silencers are currently regulated under the NFA. In order to possess NFA firearms, individuals must undergo a background check process that includes the submission of photo identification and fingerprints and requires the registration of the firearm with the Bureau of Alcohol, Tobacco, Firearms and Explosives (ATF). Individuals must also pay a $200 transfer tax, an amount that has not changed since the NFA was established in 1934.

The Giffords’ memorandum then calls for the policy that the Biden campaign website also endorses: “Giffords proposes that Congress require all existing assault weapons to be regulated under the National Firearms Act.”

The Giffords’ memorandum specifically defines “assault weapons” to include the AR-15, stating: “Assault weapons are a class of semiautomatic firearms that are designed to kill people quickly and efficiently. The most common variety, the AR-15, is the civilian version of the M16, a combat rifle that made its debut on the battlefield in Vietnam.”

As noted, if lawfully enacted, this policy could encompass “all existing assault weapons.” In practice, this could mean every American who owns a weapon like an AR-15 — or any other gun deemed by Democrats to be an “assault weapon” — could be required to submit their fingerprints and photograph, undergo an FBI background check, register these weapons with the ATF, and pay the federal government a $200 tax for each weapon.

In a recent interview with CNN’s Anderson Cooper asked Biden, “So, to gun owners out there who say, well, a Biden administration means they’re going to come for guns?” Biden responded Biden responded, “Bingo. You’re right, if you have an ‘assault weapon.’ The fact of the matter is they should be illegal, period.”

AWR Hawkins is an award-winning Second Amendment columnist for Breitbart News, the host of the Breitbart podcast Bullets with AWR Hawkins, and the writer/curator of Down Range with AWR Hawkins, a weekly newsletter focused on all things Second Amendment, also for Breitbart News. He is the political analyst for Armed American Radio. Follow him on Twitter: @AWRHawkins. Reach him directly at [email protected]. Sign up to get Down Range at breitbart.com/downrange.